Much of the "Story" (1923-1950) of the origins of Knollwood was written by one of the founding members, Lucius Teter, and was published during the celebration of the Club's Silver Anniversary. Other members have contributed to the written history since that time.

Actually, the story begins in 1923 when Knollwood was 200-odd acres of lush, rolling countryside owned by A.C. McCord. As chronicled by Mr. Teter, "...prize herds grazed over the land that is now eighteen matchless fairways. The dairy barn once stood on part of the sixteenth fairway, and today (1950) is the fine Knollwood riding stables. Waukegan Road was Telegraph Road then, and the railway station at Waukegan and Rockland Roads was known as Creamer Corners.

Some of the present members will recall when Knollwood Farm became available, they, along with others, had always dreamed of developing the territory west of Lake Forest into attractive plots for leisurely country living. A group of good friends joined together in purchasing the Knollwood Farm. The plan was at last underway.

The first officers also were elected in April of 1924. They were: Thomas E. Wilson, President; Lucius Teter, Vice President; Robert P. Lamont, 2nd Vice President; John W. O'Leary, Treasurer; Robert H. Hunter, Secretary. From that day forward, the work of putting together a comprehensive social club based on sports activities grew and took form. On February 25, 1925, there was a resolution passed consummating the Club's purchase of Knollwood Farm's 220 acres from the original group who, as planned, turned over the land to the Club at cost - $600 per acre.

The contour of the land was beautifully adapted to golf. For the design, layout, and construction of the golf course, the Club selected Captain Alison of the noted English firm of Colt and Alison of London. Captain Alison was given a topographical sketch of the property and commissioned to design the best possible course regardless of expense. It was created at a cost of approximately $10,000 per hole. The investment in building the Knollwood course was substantially higher than in other courses being developed in Chicago at that time. During the 20's, it was customary to set aside about 120 acres as sufficient for the golf course. But to avoid having greens, tees, and fairways too close together, about 175 acres were used. The course was opened for play in 1925.

Our Club historians recorded, "A simple, but attractive and spacious clubhouse was desired, so two farm houses were joined, to which Architect Howard Shaw added the large reception room. When the locker room building was completed, it was regarded as the finest in the United States. The comfort and usability of this structure attracted the attention of every visitor. Its fine decorations and appointments are such that it is unusual among facilities of this nature throughout the country.” Today, it still ranks as one of the best.

The swimming pool was financed by a group of men who rented the cabanas on five year leases and thus provided enough money for construction. A bridle path was planned to encircle the entire property and soon horses belonging to members occupied the stables. Tennis courts, too, were built and for several wonderful years, all was well with Knollwood and the Club prospered. 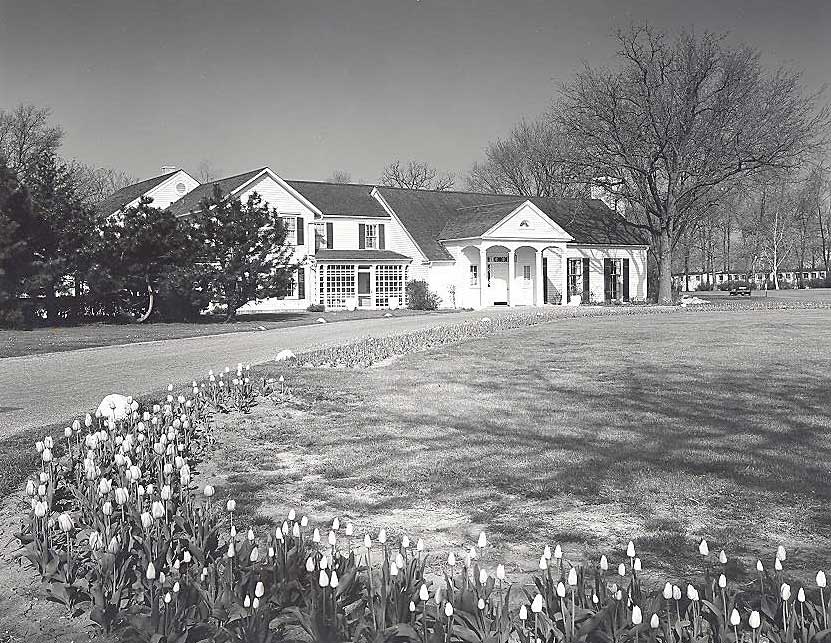 Then came the crash of '29 and the depression!

Waiting lists of all Clubs dwindled or disappeared. Many Knollwood members had to resign. A number, who enjoyed several different Club memberships, dropped one or more. Still, others gave up their horses, and in many cases, discounted their Knollwood memberships. This produced problems far greater and more distressing than those encountered during the Club's formative years. No tribute is high enough to pay the Club's officers and the members who stood by them as Knollwood struggled through the depression. Always believing in Knollwood, they helped the Club weather the storm with dignity. (Particular tribute is owed to Nathan W. MacChesney, David J. Molloy, and Samuel T. Brown.)”

The foregoing is Lucius Teter's evaluation of the Club's critical problems during the depression - yet, it is interesting to note that the membership was 327 in April of 1929 and five years later, in 1934, it had been reduced only by 24 members to 303. Between 1934 and 1938, the membership slipped to 278.

Because of the original concept for the Club, the large membership roster in those days was not surprising nor was it impractical. A major portion of the membership was made up of residents of Chicago. For these members, the Club was regarded as a "country retreat." As a result, many of its members used the Club only occasionally and therefore, the golf course was seldom overcrowded. Too, we must remember that "equitation" was a major activity. Chicago resident members stabled their horses at Knollwood and on weekends would come to ride Knollwood's extensive wooded trails.

Just as the Club was overcoming its depression difficulties, it ran into even more serious problems during the war years. Those were the days of gasoline rationing and "A" cards. Those precious few gallons of gasoline just couldn't be used to "drive up to the Club." The membership dropped below 100; the course was difficult to maintain; and the payroll was a job to meet.

As the Club emerged from the war years, problems became fewer and eventually disappeared so that Lucius Teter was able to write in 1950, "...the sun is shining brightly at beautiful Knollwood, and we face the future with confidence."

Mr. Teter’s assessment of Knollwood Club proved correct in 1956 when the United States Golf Association recognized the championship caliber of the golf course. The National Amateur Championship of the USGA was held at Knollwood in September 1956, and the course proved itself a real test for the world's amateur golfers.

The first significant modernization of the Club was made in 1959-1960 when the cocktail lounge was added along with vastly improved kitchen facilities and the enlargement and updating of the Ladies' Locker Room.

During the early sixties, it was apparent to the membership that the Clubhouse, although still graced with charm, was in need of substantial repair. From the roof to the basement, time had taken its toll, and it was obvious that something major had to be done. As a result, there was much discussion on the pros and cons of extensive remodeling and additions to the original building or the possibility of an entirely new Clubhouse which, as originally planned would be located north of and connected with the Men's Locker Building. 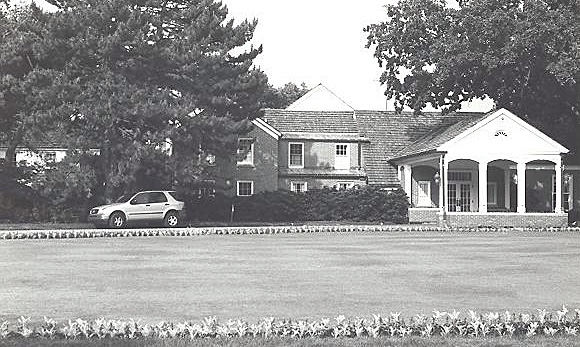 The merits of various proposals were discussed and debated. Finally, it was decided to enter into a two-phase modernization of the existing structure.

In Phase I a new wing to the Clubhouse was built to expand the kitchen facilities and to provide living quarters for the employees. This work was begun in late 1965 and was completed in June of 1966.

During this same period the wooden cabanas, which had been built in 1927, were torn down and replaced by new brick construction to complement the Men's Locker Building and the new Main Clubhouse.

With these three projects completed, Knollwood's buildings had been updated, and yet their charm, warmth, and beauty had been retained.

In 1974 an entirely new activity was introduced to the membership when two aluminum Paddle Tennis courts were built behind the Main Clubhouse. This new sport, which provides a wintertime activity, has been well received and strongly supported.

In 1973, Mr. Lawrence Packard, Golf Course Architect, was retained to develop a plan for updating and upgrading Knollwood's Golf Course. A new lake was developed on the 7th hole as the first in a series of significant changes. During late 1974 the major construction began. It included a number of new traps on the front nine, particularly around the 6th green. The 8th hole was totally rebuilt with a new tee, a new green, and new traps. The 9th hole was also changed with new lakes, new tees, and new traps. By 1975 the major work was completed and the golf course had been improved considerably.

The renovations and excellent condition of the course prompted the United States Golf Association to once again honor Knollwood Club. In September 1982 Knollwood hosted the Second U.S. Mid-Amateur Championship. The fine condition of the course prompted Frank Hannigan, Senior Executive Director of the USGA, to remark that he had never seen a course better prepared for a National Championship. Hannigan told General Chairman, Tony Hebel, that Knollwood's practice facilities ranked in the top five in the country and that the Men's Locker Building was one of the top three in the country.

In 1984, Knollwood Club embarked on a very ambitious Five-Year Plan to bring the facilities of the Club up to the same standard as the golf course. Under the plan, the kitchen was completely overhauled and remodeled, a new entrance and portico were added to the Clubhouse, a new bar was added to the Joan & Darby Room and the Main Dining Room and Governors' Room were completely renovated. These changes resulted in a warmer atmosphere and dining areas that are more suited to the members' needs.

These changes were again recognized when the Professional Golfers Association of America selected Knollwood to host the Thirteenth International PGA Cup Matches in September, 1986. An outstanding team of American Club Professionals defeated the best that Great Britain and Ireland had to offer, 16 to 9. Following the Matches, Mickey Powell, President of the PGA of America and Charles Hughes, Captain of the British PGA, agreed that no club could have been better suited, more cordial or accommodating, and they praised the warmth and friendship extended to them by the Knollwood membership.

In the late 1990’s, it was decided that the Clubhouse needed to be rebuilt. While the facility was still beautiful, the structure was feeling it’s age and was requiring heavy-duty maintenance and repairs to ensure the structural integrity and safety of the building. In July of 1999, a “Wrecking Ball” was held in prelude to the demolition of the old Clubhouse.

The new Clubhouse was built on the same site, maintaining the traditional architectural style of the original, and blending beautifully with the landscape and existing buildings. Upon completion, an Opening Gala was held in June of 2000 for members and guests. The nationally recognized club design firm of Ferris, Hayes and Allen of Atlanta, Georgia designed the beautiful rooms you see today.

Knollwood moves on with continuing improvements to our beautiful country club campus. In recent years, technology improvements have been added to the mix. However, none of these improvements ever change the timeless and elegant tradition that is Knollwood Club. 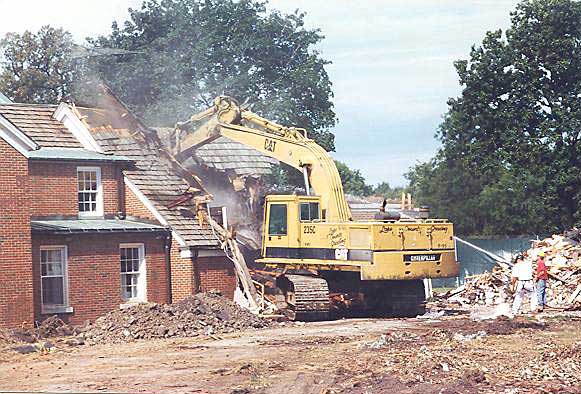